We need to collapse Total to avoid total collapse

On the 15th to 22nd of November, 2021, we, the Glasgow Agreement, will take on multinational Total all over the world in decentralized direct actions.

Exploitation of oil and mining resources in the Virunga National Park east of RD Congo in North Kivu is a threat to climate displaced people and local communities already victims of several atrocities including climate injustice and repeated wars.

This is certainly what the displaced living in a makeshift camp in Rutshuru made known on 15 November through a mobilisation activity in the framework of the #Collapse Total campaign with our movement #Xrrutshuru. On the 20th November, members of local communities bordering the giant Virunga National Park protest and mobilized others to urgently prevent the new projects of the company Total including oil extraction in the Virunga landscape.

They will keep the fight to collapse Total and to demand clear reparation for the damage caused by the polluting countries. 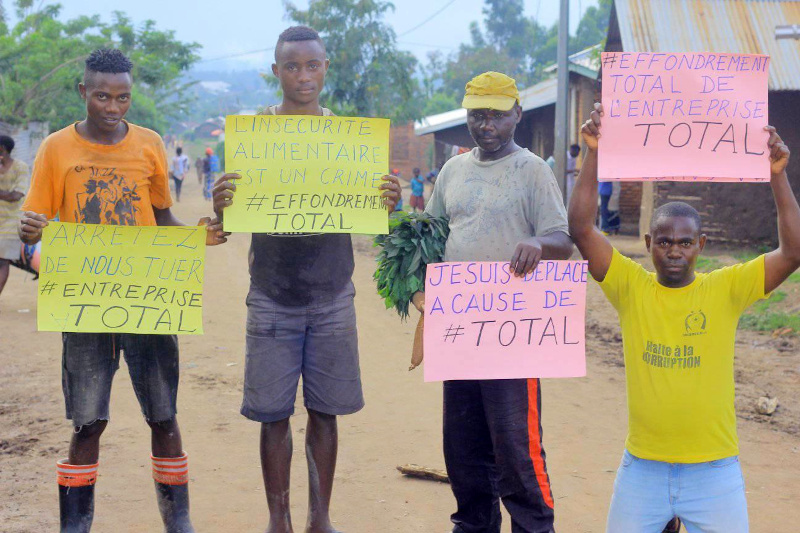 Friday for Future Zambia on 22nd November went to the streets because we need to Collapse Total an all the fossil fuel industry. 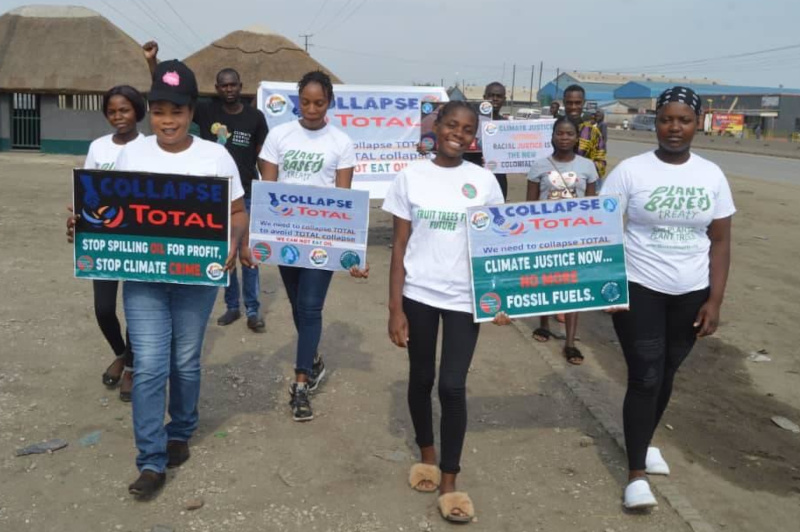 After destroying Cabo Delgado, Total keeps on continue to exploit and attack communities and biodiversity in Mozambique. Total Futseka! 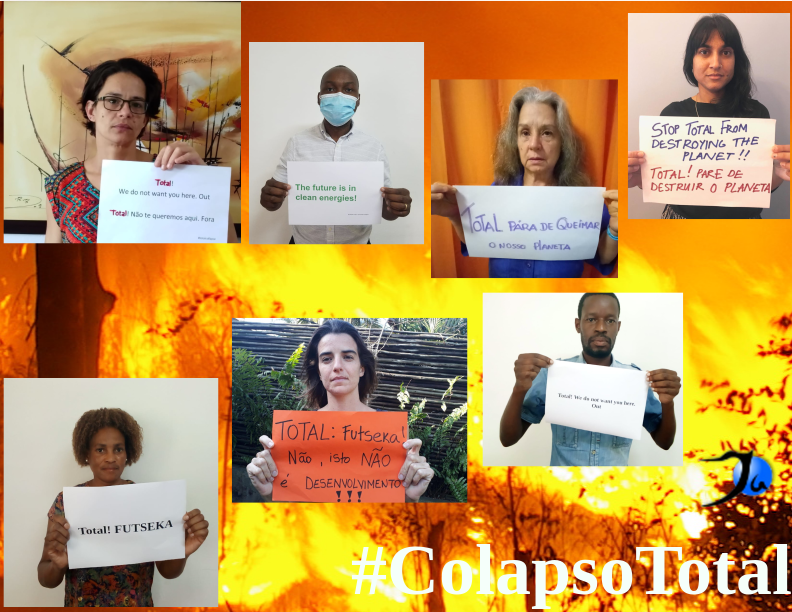 We thus reject all neocolonial influences acting against us. We can bring direct democracy for even cheaper than an electoral campaign. We are planting forests, meeting, cooking for each other, walking, moving through bicycles and skates… we are the future, now. XR Lille and Youth For Climate Lille on the 20th did a performative direct action towards Crédit Agricole and BNP Paribas who supply Total with billion dollars of invests. 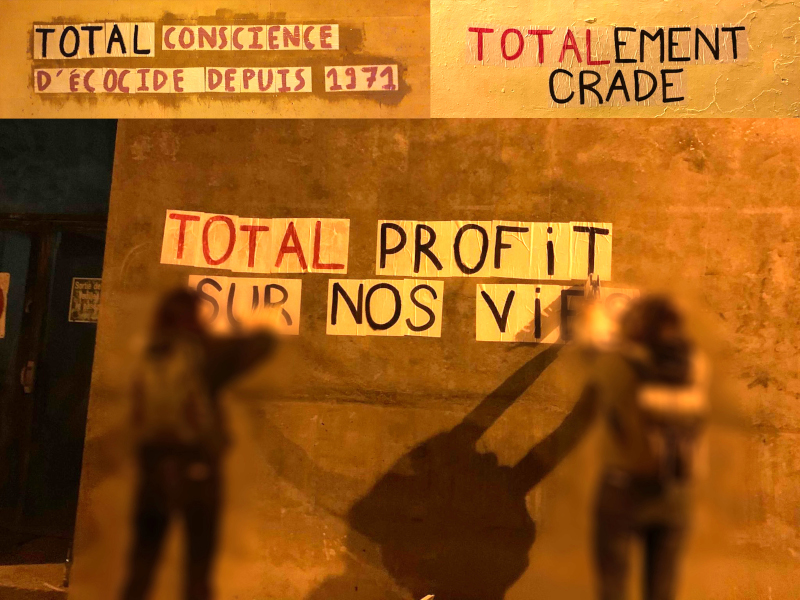 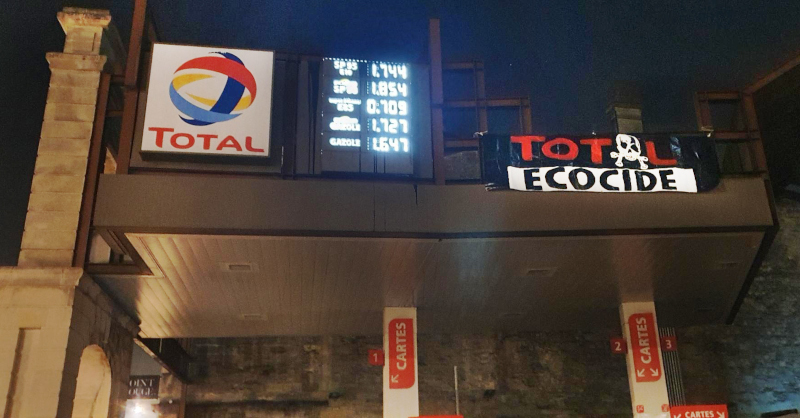 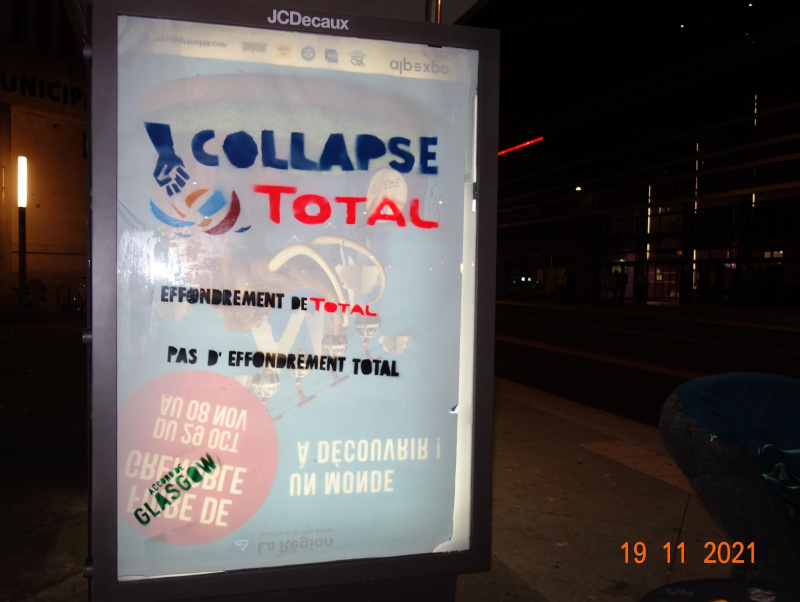 Sabotage and disruption at a gas station. 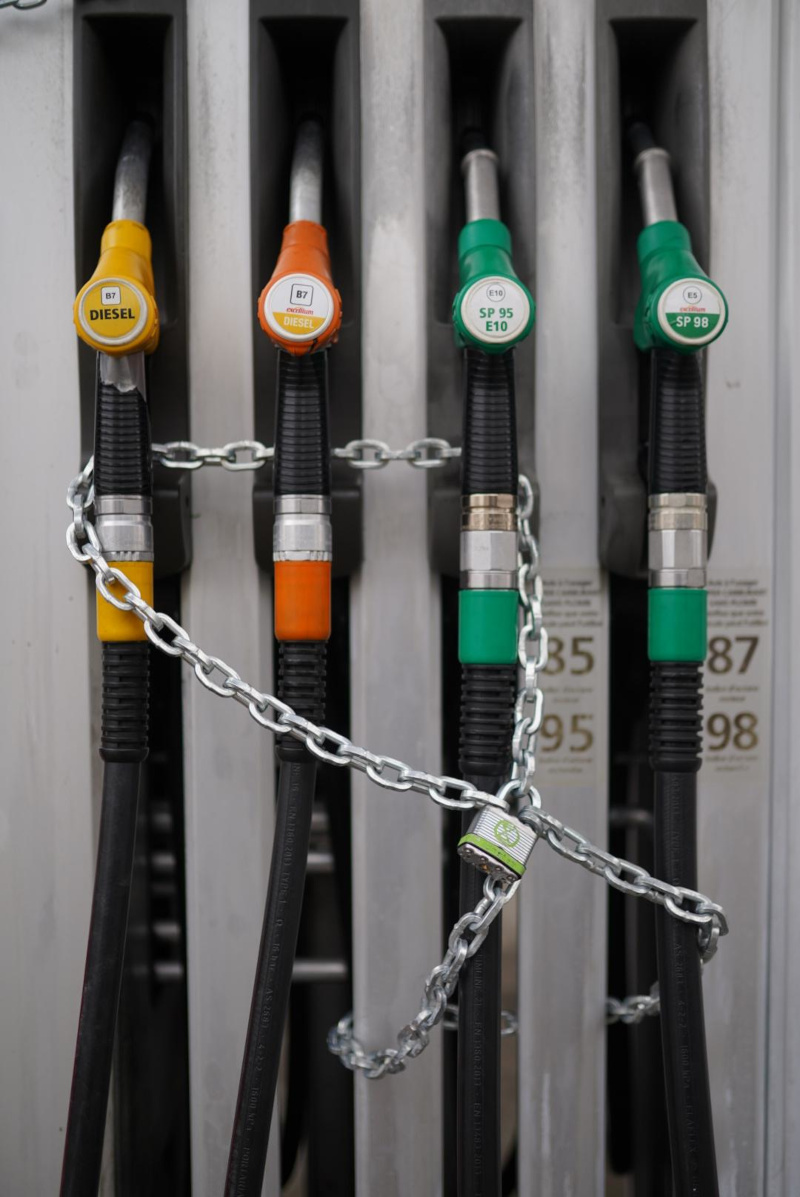 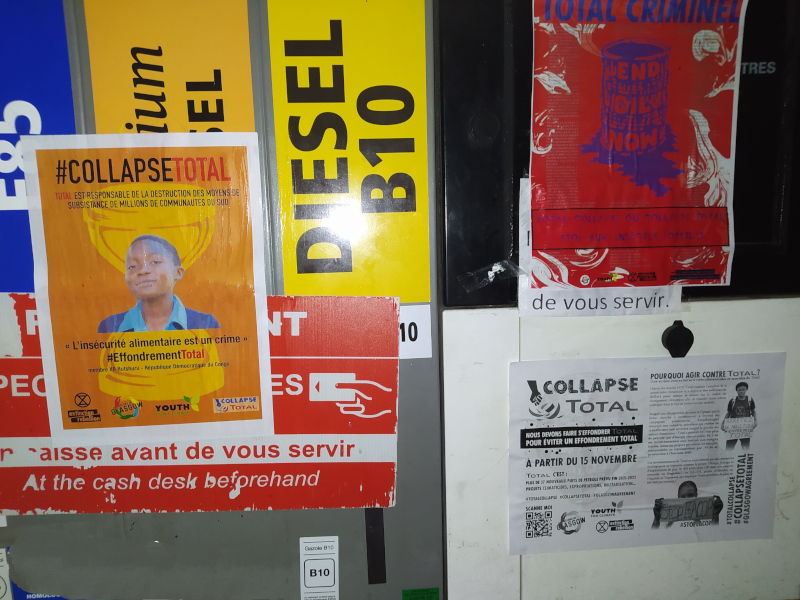 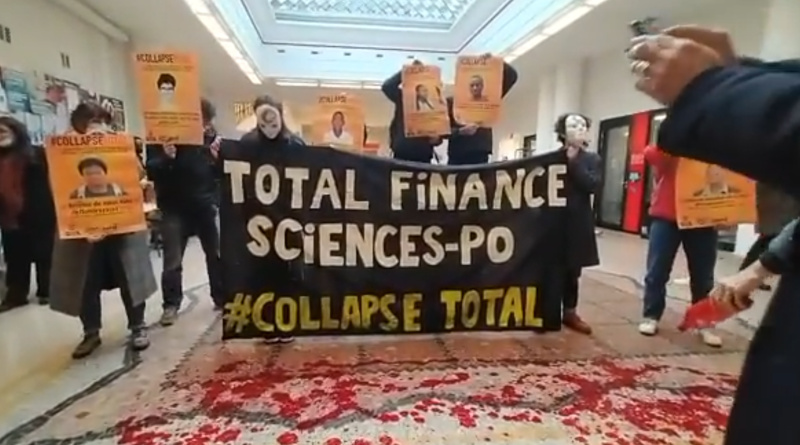 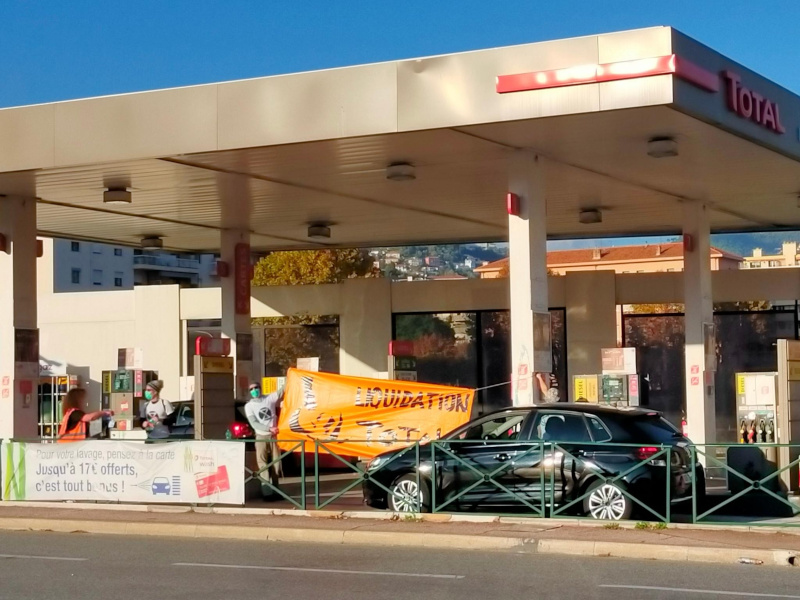 17th - Activists in Copenhagen entered and occupied Total’s headquarters, demanding they shut down and be replaced by a people’s climate house for a grassroots led just transition and to end Total’s greenwashing.

Following a public solidarity demo on Tuesday, activists stepped up to put pressure on Total together with activists all around the world. Under the umbrella of #CollapseTotal to avoid #TotalCollapse we will not accept their dirty lies and destructive industry.

18th – Activists returned for the third day in a row, and began deconstruction of Total’s headquarters. This time they covered up the windows of the office, postering statements from activists across the world as well as a declaration to continue the struggle against the fossil fuel industry. Demo in front of Total’s building in Berlin at 21th November. 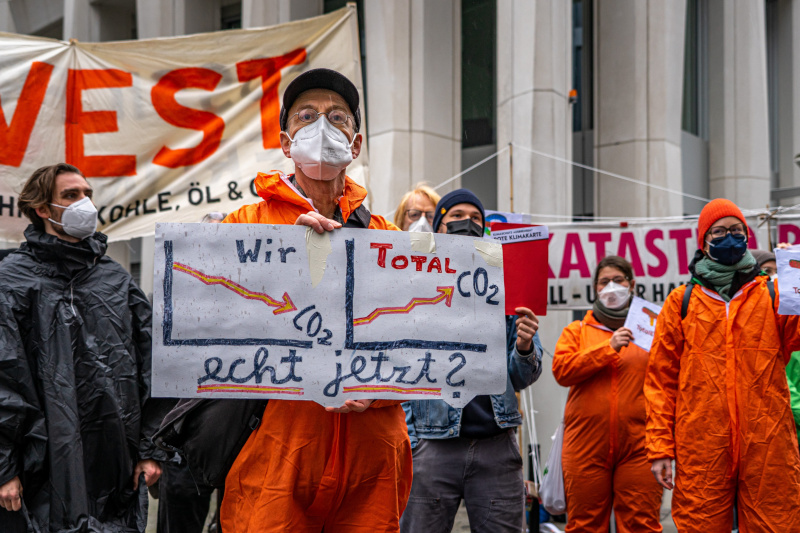 On the 22nd, activists adhack London bus-stops. For 2030, Total plans for 85% of its energy sales to still be ether oil or gas! We must stop them. 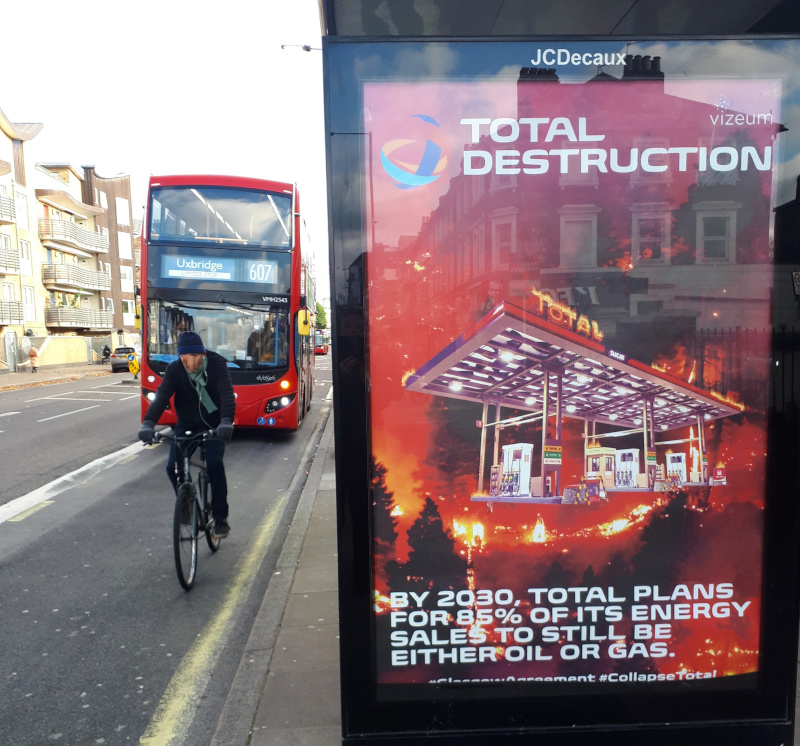 On the 19th XR Luxemburg blocked one of Total’s gas stations. More than 100 activists blocked for several hours the oil refinery from Galp in Sines, Portugal to demand the shutdown of the infrastructure, just transition for the workers and energy democracy.

On 19th November activists stood in solidarity with all peoples fighting against Total Energy and call on everyone bring their hands together to stop the big polluters. On 18th November a #CollapseTotal tour happened in Geneva, organized by Collectif BreakFree, where they exposed the business of the ecocide firm Total and its links to Credit Suisse, UBS, SNB BNS and Black Rock. Activists act against the cement factory in La Araña. We need to close with a just transition of the major emitting infrastructures to avoid total collapse.

This action was part of an action day in the Spanish State where activists act on several emitters infrastructures like the Reganosa’s plant in Mugardos. Projection by @x_feral in Glasgow during COP26. Artwork by @signsofrevolt

“How to blow up Total”, with Andreas Malm, organised by Collapse Total DE. See it here.

“From the Arctic to Mozambique – The Global Oil & Gas Exit List and Total’s Dirty and Dangerous Projects” with Katharina Bachmann and Signe Moe from urgewald as well as “Fracking Vaca Muerta“, with Esteban Servat from Shale Must Fall. Organized by Collapse Total DE. See it here

A webinar on Total imperialism and its harmful consequences happened on the 22th November, organized by 350.org France.

The Glasgow Agreement aims to reclaim the initiative from governments and international institutions by creating an alternative tool for action (emmissions inventory and climate agenda) and a space for strategy and coordination for the climate justice movement. We are more than 170 organisations, united by the understanding that systemic change is needed as well as a common definition of climate justice.

We understand that civil society must have its own plan of action, and no longer wait for governments and international institutions to act. We aim to use a vast array of strategies and tactics, including civil disobedience, to achieve the necessary emissions cuts to prevent a 1.5ºC temperature rise by 2100. This will be the first of many diverse actions.

You can sign and join the Glasgow Agreement here.

We are the ones we have been waiting for.

Why we need to collapse Total

More than 45 organizations have signed onto this call to action. Below is a list of those participating publicly: